Back on the PC side of things…the pandemic recently gave me the opportunity to “attend” the Microsoft Build event, an annual programming conference that’s usually held in person but this year was a virtual thing. It was super cool, and I learned about some current and upcoming programming tools–but what I liked best was learning about a few fun Windows 10 add-ons.

The one I want to highlight here is called Windows Terminal. It’s a customizable terminal application that can serve as a more full-featured (and prettier) replacement for the standard Windows command line program. Windows Terminal lets you have multiple tabs open, featuring different kinds of command terminals (like a regular command prompt, or a PowerShell, or other command-line interfaces), and customize how each one looks and operates.

And here’s the Windows command prompt interface, after I customized it with a retro font and colors:

The screen shot isn’t doing justice to this…in person it looks properly pixelated like a vintage monitor would!

Part of the appeal of my retro settings is the use of a modern font that recreates a classic font look. The above font is PxPlus IBM VGA8, which I got from the Oldschool PC Font Resource (“home of the world’s biggest collection of classic text mode fonts, system fonts and BIOS fonts from DOS-era IBM PCs and compatibles”).

Here’s another sample of these classic fonts…

Oh, in addition to customizing the colors and fonts, you can use a background image. Even an animated gif. Indeed, even a collection of animated gifs…

I’ll admit it: what gave me the idea to buy and set up a vintage Macintosh (as I mentioned in my previous post) was watching Captain America: Civil War again, in which Peter Parker had a vintage Mac in his room. (The cool website Starring the Computer features details like this. Peter’s Mac appears to be a Macintosh Classic.)

But also, I’ve been feeling nostalgic recently, and thinking of Macs makes me think of the first Macintosh I ever saw, at my friend Nathan’s house in the mid-1980s, when we were in high school. I always loved it. And I believe this one, and the ones in my college astronomy lab, were the only Macintosh computers I used until I bought my first MacBook in 2010.

So after getting caught up on some freelancing tasks that had been absorbing all my free time, I chose vintage Macintosh tinkering as my project to keep me sane during the global pandemic.

I did some research for a week or two on vintage Macintoshes, to decide which model I wanted and see what was available on eBay. I joined some Facebook groups and scoured the popular vintage computing websites to immerse myself in relevant info.

Two factors led to my choosing the Macintosh Plus as my best vintage option. One is that it’s the model used as standard in the Mini vMac emulator for modern computers—which I took as a sign that a significant amount of Macintosh software would run on this machine. The other factor is the Plus’s higher availability (at lower prices) on eBay at the time.

After a bit of searching over a week or so, I found a specific Macintosh Plus listing that appealed to me more than other offers (and other models). It didn’t include a keyboard, mouse, power cable, or PRAM battery (which allows the preservation of system settings), but the description was thorough and the seller said he cleaned and tested the floppy drive, and that the machine booted from floppy successfully, and he detailed the care that he would put into shipping it. Shipping was pricy, but in the end I think it was worth it.

I also found an M0110A keyboard, the one that shipped with the Plus. and I ordered a PRAM battery on Amazon. The next day, I found a Macintosh M0100 mouse on eBay.

I also figured I’d want an original Macintosh Plus Owner’s Guide, if I could find one, to learn about the system as I would have back when it was new. (I figured I could find the content in PDFs somewhere, but part of the experience of vintage computing for me is doing things the vintage way!) When I discovered that three editions of the user’s manual were produced—and that all three were available for sale—I knew I had to buy all of them. (Info on all editions is listed on earlymacintosh.org.)

I got the first edition from eBay…

…the second edition from Amazon…

I also ordered a long-handled Torx T-15 screwdriver after reading that it’s required if you want to open the Macintosh’s case (which I do). I had to get this as part of a set on Amazon.
And, to further be a completionist, I ordered a vintage Macintosh power cable (even though modern ones will work fine).

Over the next week, all the parts arrived, spaced out day by day in an agonizing way. For example, the PRAM battery arrived first, days before any other parts that could make use of it. But then the Mac and the mouse arrived, and I was able to power it on and verify that it worked.

After hearing the retro “beep!” I knew I’d made the right choice.

Now I’ve ready one of the User’s Guides, tried two system disks, started testing out the Floppy Emu (an amazing SD-card-based gadget that emulates a Macintosh floppy drive or hard drive, providing a way to transfer software to and from modern computers), and played my first Macintosh game (Lode Runner). Next stop: more games to try!

Oh yeah, one more thing…after picking the Macintosh Plus as my model, I discovered another reason why it is the machine for me…

I recently stumbled into a new hobby. I found myself wanting to acquire a vintage, early-model Macintosh and get it up and running. Not for any particular purpose, just for fun, and to dust off my retro-computing skills, and because I never owned one before. (Back in that era I had a Commodore 64, then 128, then Amiga, and didn’t own a Mac until my 2010 MacBook.)

I’m still waiting for my new (old) Mac to arrive, fresh from eBay, but in the meantime I’m reading Facebook groups and blog posts and forum discussions about Macintosh restorations. And just tonight I realized I am getting something positive out of this experience already, something I hadn’t been expecting, and something I didn’t know I needed.

Some people probably get this feeling from shows like This Old House, or Car Talk. Shows where (just like in my vintage Macintosh community) people provide help to others with specific technical problems. This Mac won’t start, but it does beep—here are the first things to check. This one needs new capacitors on the motherboard—here’s what kind to replace them with and where to buy them and how to do it. This other one is covered in stickers or pen marks—here are the cleaning supplies and techniques needed to remove them safely.

I think what I find comforting about these posts and articles and videos is the idea that broken things can be fixed, if we approach them with calm and caution and thoughtfulness, and make use of a community of caring people who are happy to help their fellows.

This is what I need to be seeing right now. 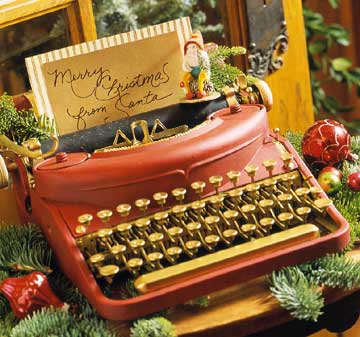 I was watching a talk that programmer/blogger Scott Hanselman gave about productivity today, and found a cool bit about writing.

Hanselman told an anecdote about a time that Paul Reiser asked Peter Falk how to write a screenplay. Peter Falk told him:

The rest of the video is good too, with lots of advice for dealing with things that tend to use up a creative person’s time.